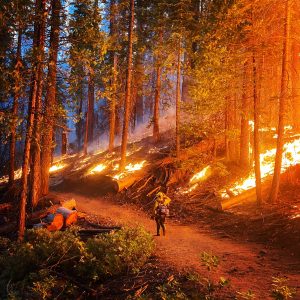 Yosemite, CA – Two areas that remained closed to travelers due to the threatening flames of the Washburn Fire burning in Yosemite National Park have reopened.

At noon today, visitors were allowed back into the community of Wawona, including the Wawona Hotel and vacation rentals. Additionally, the fire advisory for the wilderness area north of Wawona has been lifted and it reopened on Monday, July 25.

Still closed are the Mariposa Grove of Giant Sequoias and the Wawona Campground. All other areas of the park are open, but a reservation is required to drive into the park between 6 a.m. and 4 p.m.

Sections of Highway 140 that were closed by the Oak Fire burning in Mariposa County west of Yosemite reopened on Tuesday (7/26) night. According to park officials, some intersecting roadways to the highway remain closed. They ask travelers to be aware of emergency responders and “give them the room they need to do their job.”

The Washburn Fire is currently 4,883 acres and 94% contained.