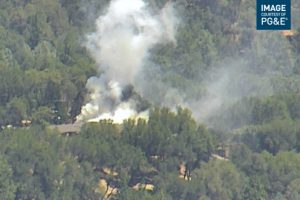 Update at 1:45 p.m.: Crews have a handle on a house fire in the Pine Mountain Lake area of Tuolumne County. CAL Fire reports that ground crews have been able to get “good knock down” on the blaze and were able to stop the flames from spreading to nearby vegetation. All Columbia aircraft have been called off the scene. Crews will continue to fully extinguish the flames and mop up for the next couple of hours. The fire started in the attic of the home, but what ignited it is under investigation. There is no information regarding damage to the residence.

Update at 1:15 p.m.: CAL Fire reports that the structure fire in the 12800 block of Moon Light Court, near Pleasantview Drive and west of Pine Mountain Lake, ignited in the attic of the home. They added, “Firefighters are working on knocking down the fire and so far have kept the flames from spreading to nearby vegetation.” Columbia Aira Attack and a helicopter remain on scene monitoring the situation.

Original post at 12:40 p.m.: Groveland, CA — Columbia aircraft and ground resources are heading to a structure fire in Pine Mountain Lake. CAL Fire reports the flames broke out in a home in the 12800 block of Moon Light Court, near Pleasantview Drive and west of Pine Mountain Lake. The picture in the image box shows smoke billowing into the air. There are currently no details on fire activity. An update will be provided as soon as new information comes into the newsroom.