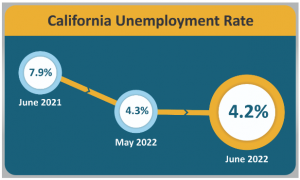 Sonora, CA — The California Employment Development Department has put out new data related to jobs and the economy.

California’s unemployment rate dropped from 4.3 percent in June to 4.2 percent in July. State officials report that June marked the sixth consecutive month of labor force gains and the twelfth consecutive month with a decrease in unemployment. Seven of the state’s 11 industry sectors gained jobs. There was strong strength reported in retail, along with trade, transportation and utilities.

San Mateo County has the lowest rate in the state at an even two percent and Imperial County is the highest at 13 percent.