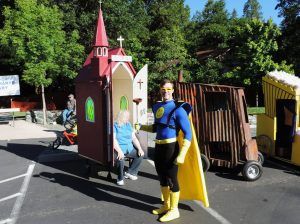 In less than three years, outhouse racing has quickly become well associated with the foothill town of Twain Harte.

Mike Lawrence and Terry Northcutt of the Twain Harte Rotary were Wednesday’s KVML “Newsmaker of the Day”.

After a successful debut two years ago, the 3rd Annual Royal Flush Crapper Derby and Craft Fair returns to Twain Harte this Saturday June 4th, from 9 AM through 4 PM.

Spokesperson Lawrence explains, “Over the past half decade, Twain Harte was hit hard by the economic recession, the lack of snow during the winter, the smoke and threat of the Rim Fire in the summer of 2013, the one time Government shutdown of Yosemite National Park and most recently the loss of Twain Harte Lake. We wanted to do something new.. something that would bring the crowds back to our beautiful town.”

Northcutt said, “We wanted to do something completely different. No poker race or golf tournament. We knew there could be very little more original, unique and fun than to hold outhouse races. And the result? Last year, 12 teams participated and the crowds were enthusiastic and we knew we had ourselves an annual event.”

The event has captured the attention of the statewide media including the Los Angeles Times newspaper. Last year, KMAX television from Sacramento broadcast live segments of the preparations for outhouse racing during the morning from Twain Harte.

This year, the entire day will be filled with numerous events, music, crafts, food, races and a parade.

The Parade, announced by Mark Corona of KKBN 93.5 FM, begins at 9 am in downtown Twain Harte and it will follow the same route as the Twain Harte Christmas Parade.

Boy Scout Troop 500 will serve a $% pancake breakfast from 7 to 11 AM in front of the Cal Fire Station in Twain Harte.

During the day, there will be a Mr. & Mrs. Tidy Bowl Contest, a Toilet Seat Toss, Tot Pot races and other children’s Activities.

Numerous vendors will be on hand and live music will fill the air.

During the main event, two outhouses at a time will race throughout the day until a winner is crowned during an afternoon ceremony.

The first place winner will receive a paid entry to the World Championship Outhouse Races in Virginia City, Nevada, in October.

The Rotary is accepting a few last minute vendors and outhouse entries.

Outhouse racing teams consist of a driver (or rider) and two pushers. Race rules and outhouse specifications are located on www.twainharterotary.com, their event listing is here.