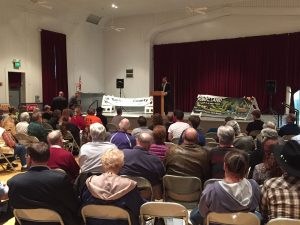 Sonora, CA — Community members gathered at the Sonora Opera Hall to hear from candidates running for US Congress, California Assembly, Sonora City Council and the Tuolumne County Board of Supervisors.

The Candidates Night event was hosted by the Tuolumne County Farm Bureau. Candidates in six different races were invited to attend, and 15 of the 18 candidates were on hand.

In the race for U.S. House District Four, incumbent Republican Tom McClintock was the first speaker. He touted his past experience and endorsements from several taxpayer groups. McClintock said, “People know where I stand, and they know I’ll stand firm.” He spoke about his desire to “reduce the costs and burdens” government has put on families and jobs. He wants to continue to push for more water storage in the region and reform environmental regulations. He also talked about wanting to “defend the nation’s borders” and “restore Constitutional rights.”

A challenger in the race, Democrat Sean White of San Andreas, argued that his being a political outsider is a strong benefit, referencing that he is declining to accept campaign contributions. He said “money is the cause of all problems” and the “system is rigged.” He said the current Presidential election is proof that people “don’t trust politicians,” and he indicated that money and large corporate interests have too much political sway. White, who is involved in the solar business, noted that he has taught classes around the world and authored three books.

Robert Derlet, another Democrat in the race, was not on hand for the forum.

In the Assembly District Five race, incumbent Republican Frank Bigelow and challenger Mark Belden, who declines to state a political party, were both unable to attend.

Democrat Assembly challenger Kai Ellsworth argued that most of the issues in the district are “non-partisan.” The 27-year-old Iraq War Veteran said they include desired faster response times to 911 calls in rural areas, fixing the region’s crumbling roads and bridges and receiving more local control over regional water supplies.

The other Democrat challenger in the race, Robert Carabas spoke about concerns he has about lawmakers in this region failing to take action on the issue of climate change. He feels the loss of millions of trees in the region due to drought have less to do about them being “too close together” and more to do with global warming. He argued there is an “economic downside” to denying global warming in that the region will not be ready for its impacts.

All four candidates seeking one of the three seats on the Sonora City Council were on hand. Newcomer Mark Plummer, who has served on the Sonora Elementary School Board,  said he would like to see Vision Sonora “completed and possibly expanded.” He added that he would like to look at the possibility of adding another police officer to the staff, noting the long length of time it took for an officer to respond to a recent overnight burglary of a pharmacy in town. He also raised concerns about proposals the city has recently had related to traffic ordinances. Specifically he was concerned about talk to make it illegal to do any minor work to a vehicle, if it is parked on a city street.

Former Councilman Matt Hawkins said he “wants to see the city strive” and hopes to see the council “work as a team” to tackle pressing issues. He said his top priority is having a “balanced budget.” He indicated he would like to see Vision Sonora carried out, but also “work together” regarding the more contentious issues. He also proposed calling for a forum to address concerns related to homeless residents, and bringing in members of the Church, business and law enforcement communities. He also would like to see additional traffic control measures such as speed bumps.

Incumbent Bill Canning talked about his experience and proactive efforts to “make Sonora better.” He compared Sonora to a “diamond” that simply needs some polish at times. He spoke about being one of initial community leaders that pushed for grant funding that would eventually kick off the Vision Sonora efforts. The idea stemmed from a conversation he had following a meeting with Caltrans that took place in the Sonora Opera Hall. On the topic of economic development, he criticized the city’s Planning Commission’s recent delay in approving the planned beer garden next to the existing Bourbon Barrel. While the plan was eventually approved at a later meeting, he argued that putting off developers can be detrimental and costly to the city.

Incumbent Connie Williams said her campaign slogan four years ago was “We can do better,” and it has now evolved to “We can do even better.” Williams also voiced praise for the beer garden project in Sonora. She spoke about wanting to better promote Sonora as a tourist destination. Williams talked about a desire to see the city partner with businesses to make them more successful and to “fill available spaces.” She would also like the city to look into partnerships with the County of Tuolumne. Williams is a supporter of the Vision Sonora Plan. Addressing concerns about the plan raised by some downtown businesses, she attributed it to a “lack of information” and not fully understanding what the plan is about. Indicating that it is still a work in progress, it will be designed to “blend into the community.”

In the race for Tuolumne County District One Supervisor, Challenger Jerry Fuccillo was the first to speak. The recently retired City of Sonora Engineer said his campaign slogan is “Let’s fix the local roads.” He referenced several local infrastructure projects he’s been involved with over past years. The most recent high profile project was the Mono Way widening. He said that California is putting much focus on spending many transportation dollars on transit, bike and walking trail projects. He argues that these projects may fit well in large cities, but not in the spread out rural regions. He wants to advocate for spending on projects that will increase the number of cars on the road and not decrease the number.

Challenger Chuck Kiel spoke about being a real estate broker in the community over the past 17 years. He and his wife also own a group home for seniors and previously owned the Rock Restaurant in Twain Harte. He feels the county needs to bring back a psychiatric unit, arguing that Sonora Regional Medical Center is not currently equipped to handle the task. He also called for incentives for developers to build more high density housing. In addition, he would like to see the county explore the option of having a homeless tent shelter on county property. Kiel also said the county needs to try to “save the biomass industry,” and posed the idea of the county looking into purchasing a struggling biomass plant near Jamestown.

Incumbent Sherri Brennan spoke about the success the current Board of Supervisors has had during her term in addressing emergencies like the Rim Fire, drought and tree mortality. She says the county has been a leader developing a plan for dead and dying trees and it is now being duplicated by other counties. The county has also been out front on forest health related matters.  It was noted by Congressman Tom McClintock during his speech that Brennan was recently invited to speak in Washington, DC on natural resource issues. Addressing her four years in office, Brennan said she, “started a job and has more work to do.”

In the District Four Supervisor race, challenger Don Matter spoke about his desire to see “less government and more people doing what they need to do.” The general contractor and business owner said he desires a government “that helps and not hurts.” He said he is also concerned by the lack of “morality and religion” in the county. He would like to see the county look at ways to “rebuild the family structure.” Matter also spoke about the idea of trying to attract a UC Extension into the county to improve education opportunities, noting that it could be a good fit considering the high amount of tree mortality.

Incumbent John Gray touted the success the Supervisors have had over the past several years in attracting grant money to the county. He specifically referenced funding for the county jail, juvenile detention facility and Rim Fire recovery. He said during the economic downturn the county was able to survive and “even do well.” When he first was elected into office nearly eight years ago Gray was critical of the $82-million projected price tag for a new jail. He noted that the project has been tightened up and is now estimated to cost closer to $48-million.

In the District Five Supervisors race, challenger Sara Shier, a Columbia College instructor, raised concerns about young adults leaving the community for better jobs. She feels local leaders need to “protect local businesses” and work together to create a vibrant county. She noted that new development should fit in with the identity of the community. She acknowledged that she currently does not have all the solutions for the county, but will “research the issues and be mindful,” in hopes of finding a “synthesis of solutions” for the county.

Incumbent Karl Rodefer also referenced successes over the past four years, including keeping the Mother Lode Fairgrounds and Railtown 1897 state park open. He also indicated the county has received much kudos from state and federal officials for its ability to handle the Rim Fire, drought and tree mortality. The Governor’s Office backed Tuolumne County’s efforts to receive Rim Fire Recovery money through the National Resilience Competition. The county’s response to the drying wells received recognition from the California State Association of Counties. Rodefer said he has the “decisive leadership and clear vision” to get things done.

The upcoming primary election will be June 7th.