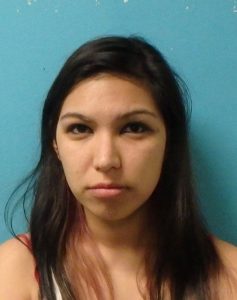 Sonora, CA — A Jamestown women faces felony DUI charges after her vehicle smashed into a pole on Stewart Street in downtown Sonora.

The crash happened at 2:19 a.m. Saturday on Stewart Street near Williams Street.  Sonora Police report 28-year-old Megan Powers was driving a 2004 Nissan Xterra when she struck a power pole.  A passenger in the SUV, 53-year-old Linda Winter, suffered moderate injuries in the wreck.  She was taken by ambulance to Sonora Regional Medical Center for treatment.

Officers on the scene determined Powers was under the influence and she was arrested.  SPD reports the SUV had major front-end damage as can be seen in the photos in the upper left-hand image box.  Power’s remains behind bars on $25,000 bail facing felony charges for driving under the influence, resulting in an injury.

A PG&E crew was called to the scene to repair the power pole, which was leaning into the roadway.  Officers directed one-way traffic control for several hours as crews worked to up right the pole.