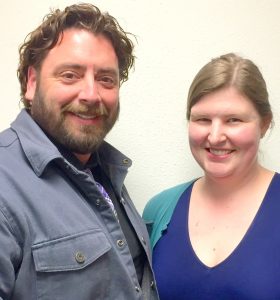 Sonora, CA — Due to reports of arsenic and nitrates showing up at concerning levels in certain local wells, environmental health officials are hosting a public forum this week.

On Monday, Tuolumne County Health Officer Dr. Liza Ortiz and Environmental Health Director Rob Kostlivy spoke with Clarke Broadcasting at an informational meeting for local media called by Deputy County Administrator and Office of Emergency Services (OES) Coordinator Tracie Riggs. As previously reported here, it has been just a few days since county officials released a media alert sharing that some drinking water samples taken March 3 by the Tuolumne County Environmental Health Department from private wells in the Quartz Mine-Stent area of Jamestown came back from the State Department of Public Health Radiation and Sanitary Laboratory with elevated levels of arsenic and/or nitrates.

Affected residents were immediately alerted and advised to switch to bottled water for all drinking and cooking/food preparation uses as well as for brushing teeth and making ice, while more testing and move-forward best practice remedies are worked out. This Thursday evening these residents and any other interested members of the public are invited to attend an outreach session that will be held at Jamestown Elementary School (18299 5th Ave.), beginning at 6. It is being held in conjunction with the Tuolumne County Public Health Department, OES and the State Regional Water Quality Control Board.

Kostlivy explains, following an alert by a local resident who, last August, had provided a private testing sample with elevated levels, more local tests in the Quartz Mine-Stent area of approximately two miles were gathered. Following a second round of samples sent earlier this month, more than half came back exceeding the US Environmental Protection Agency (EPA) levels for arsenic and/or nitrates. Dr. Ortiz notes that these levels are 10 parts-per-billion (ppb) and 10 parts-per-million (ppm), respectively.

Further detailing the sampling methodology used, Kostlivy shares, “We try to obtain samples as close to the well as possible. Sometimes this cannot be accomplished because of various factors. If we are unable to access a water source directly from the well, we try to find the next spigot in line with the well.”

While well owners generally carry all responsibilities for their wells, ranging from maintenance, testing, and associated costs — due to the drought and the drought inspections Kostlivy conducted, he felt that the county and state needed to take a closer look at water quality in the Quartz Mine-Stent area. “Once we decided on testing, we contacted various property owners and asked for permission to test their wells, and since we initiated the testing request, we covered the cost of the testing,” he explains. “This holds true to the most recent testing we conducted on March 3 — we are anticipating on testing again in the near future…we will have specific parameters of desired locations to test and will cover the cost associated with this test.”

Kostlivy emphatically points out that, while the local and state governments cannot accommodate random requests to test wells at their cost they will provide for the sampling of wells within specially designated testing parameters and locations. He directs residents outside the Quartz Mine-Stent area wanting their wells tested for these or other contaminates to contact his office. Again, clarifying his statement for others outside this area who might have concerns, he notes, “We can direct them to the appropriate testing agency…at the cost of the homeowner/property owner.” Having said this, he advises those who have their wells tested and subsequently find elevated levels of contaminants to alert his office, so that staff can track areas that may demonstrate potential issues. In either case, the number to call is 209 533-5633.

As the notice sent to well owners in the designated area of concern states, arsenic exposure in most water sources tends to be the inorganic form, which, when consumed as drinking water, may exert toxic effects after acute short-term or chronic long-term exposure. While Dr. Ortiz assures residents that no one has yet demonstrated any such symptoms, acute effects can include vomiting, abdominal pain, and diarrhea; chronic effects may result in skin changes; long-term and high level exposures may generate an increased risk for skin, bladder and lung cancers. Her communication to the impacted residents outlines that nitrate levels in drinking water, which can come from natural, industrial, or agricultural sources — including septic systems, storm water run-off and fertilizers — may well vary throughout the year. Medical advisories indicate that infants and pregnant women are particularly at risk.

For well owners, this recent development, according to Kostlivy, might be an opportunity to learn how to ensure that your water quality is within safe consumption standards. The California Environmental Protection Agency notes that well locations can have a direct influence on what chemicals to test for; these might include but are not limited to bacteria, metals, and nitrates. While comparing your well water test results to public drinking water standards is helpful, quality of well water is not regulated by the state and it is up to those on wells to take general responsibility for monitoring. Both the state and EPA recommend annual testing of domestic wells used for drinking water. Costs can range into the hundreds of dollars, depending on testing needs. For related resource information, click here.