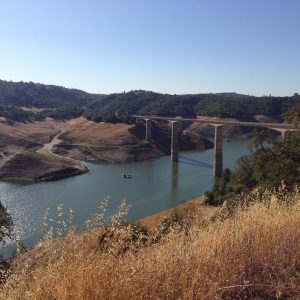 Tuolumne County, CA — The plane that crashed into New Melones Reservoir on Saturday was registered out of Bend, Oregon.

We reported earlier that the crash happened at around two o’clock in the afternoon. It was an amphibious plane, meaning it can both take off and land on the water. The FAA has identified it as a “single-engine Maule MX-7.”

Tuolumne County Sheriff’s Office spokesperson, Ashley Boujikian, adds, “Boating unit deputies responded with lights and sirens. When they arrived, they located the pilot sitting on top of the submerged plane. Through investigation, deputies found the pilot was taking off when the plane overturned for an unknown reason. The pilot was able to escape the plane while underwater and reported he was uninjured. Deputies assisted the pilot in returning to shore and towed the plane as close to the shore as possible.”

The pontoons on the plane started taking on water and it began it sink. The sheriff’s office was forced to cut the tow line and the location of the plane was marked for future recovery efforts.

The plane was removed from the water as detailed here, more information about the uninjured pilot is here.