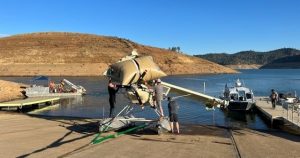 Tuolumne County, CA – An amphibious plane that crashed into New Melones Lake and sank earlier this month has been recovered.

We reported here on Saturday, June 11th, that the plane crashed into the lake in the two o’clock hour and overturned, but the pilot escaped unharmed. The next Monday (6/13), Tuolumne Sheriff’s officials released new information on the incident, noting that it was a single-engine Maule MX-7 out of Bend, Oregon that crashed while taking off. They added that it sank as rescue teams towed the aircraft to the shore and the area was marked for recovery, as detailed here.

On Monday, Tuolumne County Sheriff’s Boating Unit deputies and Calaveras County Sheriff’s Office Dive Team and Boating Unit worked together to recover the plane that was submerged about 60 feet down. As the pictures in the image box show, the crews used airbags placed under the overturned plane to bring it to the surface. The recovery went well, according to sheriff’s officials, who stated, “Plane and simple, the operation went well.”