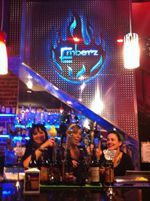 Sonora, CA — A Sonora restaurant owner shared details of a particularly “sneaky” burglary attempt on his premises that occurred during the early hours Sunday.

Emberz restaurant co-owner Steve Zelinsky says he noticed signs of the break-in when he arrived on the premises early that afternoon to do payroll. “Our office door was locked…we never close and lock it — and had to pry the door open because we don’t have a key to it,” he explains. Sharing additional details, he recounts, “They came in through the attic space and…broke in through the sheet rock on the walls…got into the office from up above…bypassed all the cameras and motion detectors, so they knew…were familiar with the building and with the office. So we are not quite sure…we have suspicions of who it might be — but they did not get anything of value.”

Fortunately, the nightly deposits were locked into an office safe that Zelinsky says was tipped over. As he points out, “[The burglars] tried to get into it but were unsuccessful,nor could they take it out the way they came in.” Emberz’ only losses were a locked cash box that was empty and a jar full of bar change that was on the office desk, which totaled $30 or $40, he says. “In all reality, we were very fortunate that is all they got,” he admits with relief. Still, he states, “It is obviously a violation. Anybody feels violated when someone comes into your own private property and steals from you, of course, and it is a threat to the other businesses in the area. So there is obviously some crime going on in here and we would like to try to do something about it.” With a hint of frustration, he acknowledges, “They knew that if they went out through the doors or down the stairs that they were going to be caught on camera, so they were aware of the cameras in the building and were very sneaky about how they got in and tried to get out.”

Zelinsky adds that his family is working with the Sonora Police Department as it continues to investigate leads in the case. Anyone with information is asked to contact the police at 209 532-8143.