Police Say Plan Before You Party This St. Pat’s Day 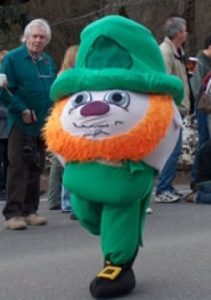 Sonora, CA – It is said that everyone who wants to be is Irish on St. Patrick’s Day; local law enforcement officials add that those celebrating the holiday should also plan to be smart about it.

“Obviously, St. Patrick’s Day is one of the heaviest alcohol consumption days of the year…it does lead to a significant increase in alcohol-related accidents — and alcohol-related fatalities,” according to California Highway Patrol Sonora Area Unit Sgt. Randy Matyshock. He adds, “What we have always done on St. Patrick’s Day — and throughout the year – is stress the importance of ‘smart’ consumption of alcohol, for lack of a better term.” He advises those who plan on imbibing while celebrating to have good strategies in place; along with Uber and taxis, consider getting a designated driver to solidly commit to keeping everyone in your party safe so as to avoid someone getting behind the wheel in an impaired state.

“Have a solid plan — it is easy to say that you are going to have a designated driver and then have a few drinks — and then those plans seem to go out the window,” Matyshock warns. “If you have a few too much to drink and you think you are going to be okay to drive, then you have to have someone you can trust who is going to be able to take those keys away from you and make that the right choices are made.” It is too late once police make a traffic stop on a driver with alcohol in his or her system, the sergeant emphasizes. Among the poor decisions he has seen Matyshock shares, “Sometimes we arrest a designated driver and there is someone more sober or completely sober in the passenger’s seat.”

Noting an increase of alcohol consumption throughout the day, expect increased enforcement on the roads from the early morning of the holiday until early March 18, according to Sgt. Matyshock. “Locally, we are not doing a DUI checkpoint but we are going to have officers that are going to be out saturating the area for the main purpose of DUI enforcement since it is such a prevalent issue on St. Patrick’s Day,” he states. Expect other law enforcement units in the Mother Lode to be on heightened enforcement detail, too.

According to state figures from the Angels Camp Police Department, from 2010 to 2014 over the St. Patrick’s Day holiday period (measured from 6 p.m. March 16 to 5:59 a.m. March 18) 266 lives were lost due to drunk-driving crashes. As pedestrians are more at risk, pub-crawlers sober and otherwise should keep an eye out for vehicles; make extra sure to use crosswalks and obey traffic signals. Drivers should additionally watch out for impaired walkers who may not obey the street signs.

As a third of all fatal crashes involve drunk drivers, anyone witnessing one is urged to pull over and call 911 when it is safe to do so — and please be ready to provide a description of the vehicle to law enforcement.

An added note, as Murphys Irish Day is this Saturday, similar revelry with added attractions and related activities are expected so enjoy and be safe!