Local Support For Increasing The Age For Smoking 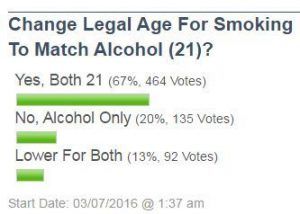 A recent informal myMotherLode poll asked “Change Legal Age For Smoking To Match Alcohol (21)?” and the results were 67 percent in favor, 20 percent for only alcohol being 21, and 13 percent in favor of a lower age for smoking and drinking.

As reported Thursday the California Senate voted in favor of increasing the age to purchase cigarettes from 18 to 21. It was part of a package of six anti-tobacco bills that have now passed both houses of the legislature. Amendments exempt active-duty military members, who could still buy cigarettes at 18 with a military ID. The bill specifically addresses buying, not possessing, tobacco. Governor Jerry Brown will have to sign each of the six bills for them to become law and he has not indicated if or when he may do so. A veto could also be overturned by the legislature.

If Gov. Brown signs, California will be the second state, after Hawaii, with a higher age limit. Several municipalities, including as of March 1st of this year when San Francisco (now the second-largest city after New York City) raised the minimum age to 21 to buy cigarettes and other tobacco products, including e-cigarettes. Boston also requires tobacco buyers to be 21.

The other California anti-smoking measures that passed aim to restrict electronic cigarettes in the same way as tobacco products. The increasingly popular devices are currently not regulated by the federal government.

According to the Associated Press the American Cancer Society says the six bills represent California’s most substantial anti-tobacco push in nearly two decades. Advocates didn’t garner enough support to raise cigarette taxes, which requires a two-thirds supermajority. The Cancer Society and other groups are seeking to qualify an initiative for the 2016 ballot.

As discussed here Calaveras County Supervisors were asked to affirm jail officials’ new response protocols designating both a dedicated mental health worker and a clinician to serve those in crisis or with mental health needs. New Calaveras inmate programs focus on self-esteem and anger healing as well as effectively managing anxiety or depression disorders and substance abuse issues. The draft resolution also called on county personnel and local residents to join efforts to reduce the number of people with mental illnesses in the county jail.