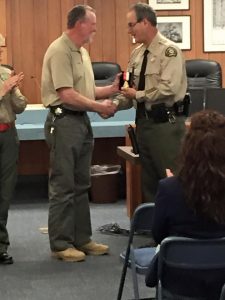 Sonora, CA — Tuolumne County Sheriff Jim Mele awarded employees who have gone above and beyond in their jobs.

On Wednesday, Mele held the 8th Annual Awards Ceremony at the Tuolumne County Board of Supervisors Chambers in recognition of exemplary service to the Department and the community.  The medals and plaques were issued for a range of achievements from distinguished service to medal of valor.  One incident took center stage, the November 2014 Washington Street Shoot out with suspect Bruce Snyder, fatally shot in the gunfire.  When asked by Clarke Broadcasting why there was a delay in handing out these awards, Sheriff Mele responded, “We wanted to make sure that we gave time for the family to obviously go through the process of losing a loved one, but also the deputies, the dispatchers and the officers that went through this.  This was a life changing event for all folks that were involved.” He also says he wanted the investigation completely wrapped up before moving honoring those involved.

View pictures of the awards ceremony in the upper left-hand image box. For the list of winners as provided by the TCSD, click here TCSD Awards summary 2015 .