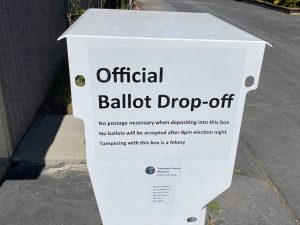 Sonora, CA — The interest ahead of Tuesday’s primary election has been somewhat low, according to local election officials.

It could be partially because interest in state-level seats has been minimal, compared to some years past, as Governor Gavin Newsom and US Senator Alex Padilla are running for re-election against lesser-known challengers.

It is different for the local Congressional and State Senate races, as they will continue into November, with the top two vote-getters, regardless of party, moving onto the General Election.

The state reported yesterday that early voter turnout was only around 14-percent, statewide. In Tuolumne County, it is at 24-percent, as of today, according to Clerk and Auditor-Controller Debi Bautista. During the June primary four years ago, the final turnout was 53-percent. Bautista notes that it remains unclear if the county will reach that figure this year.

A reminder, tune in to hear twice hourly local election updates after the polls close at 8pm on Tuesday on AM 1450 and FM 102.7 KVML, Star 92.7 and 93.5 KKBN. The results will also be posted on the myMotherLode.com election section.

Vote centers are open in communities across California through Election Day.

In Tuolumne County, Vote Centers are open at the Tuolumne Veterans Memorial Hall and at the Main Elections Office at 2 South Green Street in downtown Sonora, the Jamestown Community Hall, Groveland Library, and the Twain Harte Bible Church. The Vote Center locations are open until 4:30pm today, and then 7am-8pm on Tuesday.

In Calaveras County, Vote Centers are open at the Government Center Elections Office, the Jenny Lind Veterans Memorial Hall, the Bret Harte High School Theater in Angels Camp and the Mokelumne Hill Town Hall. They are open until four o’clock today and 7am-8pm on Tuesday.