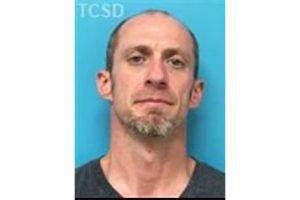 East Sonora, CA – A high-speed chase last week in East Sonora began after a Stockton man defied a restraining order and allegedly tried to run a vehicle off the road with a woman and her children inside.

Tuolumne County Sheriff’s Deputies responded to the area of Paseo De Los Robles, off Phoenix Lake Road, in Sonora around 9 p.m. on Tuesday for a domestic disturbance. It involved 39-year-old Tarren Whitaker, who was at a residence in violation of a domestic violence restraining order.

While deputies were heading to the scene, they learned the female victim had left the residence with her children and Whitaker was following her vehicle. Deputies spotted Whitaker’s vehicle in the area of Hess and Phoenix Lake Road and attempted to make a traffic stop, but he sped away. Sheriff’s officials detailed that Whitaker drove at a high rate of speed, made an unsafe turn, and drove through a red light before stopping in the parking lot of Sonora Sleep Works in the 14300 block of Mono Way, near the Aladdin Inn.

Deputies had their guns drawn and Whitaker was arrested without incident. Further investigation revealed he had used his vehicle in an attempt to force the victim’s vehicle off of the roadway. Whitaker faces charges of felony child endangerment, evading a peace officer with disregard for safety, violation of a domestic violence restraining order and a misdemeanor warrant. He was placed on $132,500 bail.