Cause Of Fire Near Sonora Elementary Determined 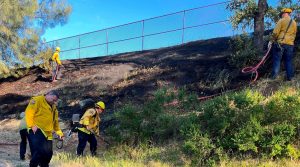 Sonora, CA — Officials have released what caused a fire that ignited this past Sunday near Sonora Elementary School.

The Sonora Police Department reports that it was fireworks. We reported earlier that it burned approximately 1/8 acre and was quickly contained by the Sonora Fire Department, CAL Fire, and the Tuolumne County Fire Department.

No additional information has been released, and an investigation is still ongoing. Anyone with information about the incident is encouraged to call the Sonora Police Department at 209-532-8141. There is a fireworks ban throughout Tuolumne County, including the City of Sonora.