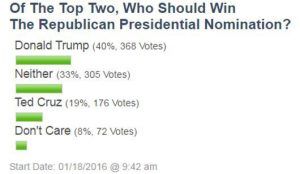 The recently concluded informal myMotherLode.com poll asked, “Of The Top Two, Who Should Win The Republican Presidential Nomination?” The choices were Donald Trump and Ted Cruz, but unlike the recent Democrat poll, an option of neither was also allowed due to the number of republican candidates.

Trump led the informal results of over 900 votes with 40 percent to Cruz’s 19 percent with 33 percent voting for neither. Back in June, when Trump announced his run, our informal poll asked our visitors if they supported him as a candidate for president. The results of the two day poll with over 650 votes were; 41 percent in support, 40 percent don’t support and 19 percent don’t care.

The results of the recent informal myMotherLode poll about the democratic presidential nomination had Bernie Sanders leading Hillary Clinton 35 percent to 14 percent. Notably 51 percent voted they did not care who wins the Democratic Presidential Nomination and only 8 percent voted they didn’t care about the republican nomination. Also, in contrast to our poll, a Jan. 6, 2016 Field Poll of likely voters in California’s Democratic Primary found 46% in support of Hillary, while 35% support Sanders.