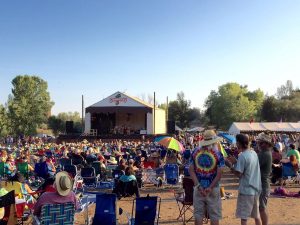 Tuolumne, CA — After what organizers call “a three-year rollercoaster ride” through venue changes, a landmark Mother Lode festival has officially settled in Tuolumne for awhile.

For nearly 30 years before being displaced by the 2013 Rim Fire, the Spring and Fall Strawberry Music Festivals served as bookends to the summer recreation season at Camp Mather near Yosemite National Park; ever since, organizers have been on the scramble to reestablish the events with longtime followers. Event planners confirm that Camp Mather, owned by San Francisco Recreation and Parks, continues to not be a viable location option.

Last Labor Day Weekend, after much coordination with county administrative, transportation and sheriff’s officials, the fall event successfully resurfaced for the first time since the wildfire at Tuolumne’s historic Westside property, owned by the Tuolumne Band of Me-Wuk Indians. This year’s Fall Festival, scheduled for Sept. 1-4, will make its reprise at the same venue, albeit, enhanced with many onsite improvements, according to festival spokesperson Jodi Barnett. She adds that recently confirmed headline acts are 2016 Rock and Roll Fame of Fame nominees Los Lobos, and International Bluegrass Hall of Famers The Del McCoury Band, both multiple Grammy Award winners.

Among the tweaks underway on the Westside property by festival organizers, in tandem with the Tuolumne Economic Development Authority of the Me-Wuk Tribe (TEDA), are the seeding of grass in the live music and kids’ program areas; development and expansion of camping areas; relocation of the restroom/shower facilities to a more central location; more potable water stations; and seating adjacent to the food concession area. Additionally, a number of planned programming fixes are in the works, Barnett says, that will help restore the “jam culture” roots of the festival for those who enjoyed them before; as well as to reach out to new audience members, who may attend due to the much improved access and closer proximity of the Westside property to surrounding communities.

Black Oak Casino Resort plans to again provide shuttles between the festival site and its facilities that will enable cross-programming opportunities, according to Barnett. Too, she says, “We look forward…and want to increase transportation into town, and anticipate building [business] relationships. Tuolumne [City] is the other half to Westside. The ball field, Memorial Hall…park…businesses located in and around town. We want to see our folks going out to those areas…and going to the museum to see what Westside used to look like [historically].”

As they further develop partnerships and opportunities with local businesses, Barnett says it is quite possible this year’s event may bring additional offerings, such as more widely available public transportation alternatives and the ability to take some of the music offsite. “These are all part of the conversations that we have yet to have but are really looking forward to in this new year,” she notes.

Since leaving behind all the water recreation offered at Camp Mather’s Birch Lake was among the hardest aspects for festival goers to recover from, Barnett shares she is particularly excited about current discussions underway with TEDA to develop Mill Pond into a permanent full body of water that might potentially offer even more water recreation opportunities than available at Camp Mather. “Being in a drought, there is no water to fill the pond now, but the dam, which is a historic dam…needs restoration to meet current standards, and TEDA is working right now, to put the permits in place to do that,” she states. While it most probably will not be something festival goers can look forward to this year, she says it is possible that the pond could be full in time for the 2017 event.

This year’s Strawberry Music Spring Festival, set for May 26-29, will be held at the Nevada County Fairgrounds in Grass Valley for what will be the third year in a row now. Advance ticket sales for it and the Fall Festival, which began just before Christmas, continue. However sales of the limited availability All-Festival pass will close at the end of the month. For more details, click here.