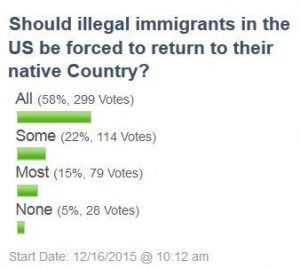 Acts of Congress, not states, were given the power to establish a uniform Rule of Naturalization, the laws used to determine if someone can legally immigrate, in Article I, Section Eight of the Constitution. The 14th Amendment, adopted after the Civil War in 1868 and also defined in 1898 in United States v. Wong Kim Ark, established that everyone born on U.S. soil is a U.S. citizen (except the children of foreign diplomats and enemy soldiers in wartime.)

Thwarted by Republicans in control of the House President Obama decided to issue an executive order to establish two programs, one called Deferred Action for Parents of Americans, and the other the Deferred Action for Childhood Arrivals. Currently, the Supreme Court has not decided whether it will review a lower court decision to prevent the programs from going into effect. The programs could change the status of an estimated five million people. Texas and 25 other states sued, and local U.S. Congressman Tom McClintock agrees, the Office of President should not have the authority to establish such programs. McClintock’s called the issue a “Constitutional Crisis” last year, and his full statement is in his blog here.

So far the Supreme Court chose to grant only 8 days of a requested 30 day delay by Texas and 25 other states to prepare a response to the Justice Department’s request for the Supreme Court to hear the case. If the court does hear the case it is thought the decision could be made by June 2016, just months before the November Presidential Election.

In another four day poll myMotherLode.com asked “Will you be buying or selling a home in Tuolumne or Calaveras County in 2016?” 15 percent answered Yes. A related news story reports that assessed property values are up five percent this year over last. The full details are here and you can check out local home prices in our Real Estate section here.