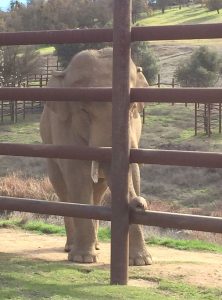 San Andreas, CA — About 700 visitors helped the Mother Lode’s wildlife refuge celebrate the holidays ahead of its ambitious 2016.

Performing Animals Welfare Society (PAWS) officials share that the organization’s annual Holiday Open House last Saturday, which sold out, raised about $15,000 to help care for its resident elephants, tigers, lions, bears and other species. Program Director Kim Gardner says that out of the proceeds PAWS plans to make a donation supporting Butte Fire recovery efforts. While PAWS 2,300-acre compound in San Andreas eluded the fire footprint and did not need to evacuate, the disaster impacted so many people and animals in Calaveras County, Gardner states, adding that several of its own staff members suffered home loss or damage. Out of respect to the community, PAWS earlier had cancelled its annual major fall fundraiser, the Elephant Grape Stomp event.

Early in the new year, Gardner shares that a ribbon cutting is planned for the PAWS Pat Derby Memorial Animal Wellness Center that will be located onsite. Dedicated to PAWS Co-founder Derby, an animal activist and former Hollywood animal trainer who sadly died of cancer in 2013, the facility is part of her vision for promoting education and research as well as to further improve on administering to the unique and often elevated needs of wildlife living in captivity. Designed by PAWS President and Co-founder Ed Stewart, the actual cost of the project, due to in-kind donations, hovers somewhere around a million dollars, according to Gardner. Although the exact date for the opening has not been announced, she projects that it will likely be sometime in February. Next fall, she says, PAWS will host a wildlife conference that may generate an attendance of several hundred people.

As for plans to add to the animal inhabitants onsite, Gardner says, they remain fluid. In addition to gradually relocating however many of the remaining mostly geriatric residents they can from PAWS 30-acre refuge in Galt, staff is in constant contact with enforcement authorities, zoos, circuses and other entities involved with performing or pet wildlife. While opportunities are sometimes years in the planning, such as in 2013, when PAWS acquired the remaining three elephants from the defunct Toronto Zoo program. Others arise out of sudden, dire circumstances; such as the PAWS 2003 rescue of 39 tigers seized by wildlife officials from a wretched compound in Colton, Calif. These rescues, when they occur, are funded through mostly private donations. While Gardner says it is fortunate to have wealthy contributors, it counts on regular small contributions from $5 to $500 to help pay for its rescue operations as well as to cover its annual operations costs, which she estimates at about $4.5 million.

A certified wildlife sanctuary, PAWS does not have breeding programs or require the animals to perform and is open to the public for only a few, select events each year. To view images and video from the recent Holiday Open House, click in the upper left image box. Click here to watch Stewart regaling visitors while answering their questions about the resident elephants, including one about their taste for the local oaks. To learn more about PAWS, click here.