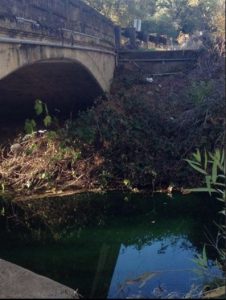 Jamestown, CA — State Emergency Health officials have released the details on test results from a substance found in Woods Creek behind the Sierra Energy Gas Station on Highway 108 in Jamestown.

As reported on Dec. 4, a citizen alerted the Tuolumne County Sheriff’s Department to a possible hazardous neon green material in the water. Once on the scene, deputies called officials from the California Department of Fish and Wildlife and Environmental Health to investigate, who took water samples to determine if the substance was toxic, where it came from and how far it had spread. (You can view Sheriff’s Department pictures in the upper left-hand image box.)

Initial test results found the material was non-toxic, with officials calling the substance a dye. Further testing, done over the past week, confirmed those results. Sheriff’s spokesperson Sgt. Andrea Benson says, “They [Environmental Health officials] did deem that the non-toxic substance was a dye and of no concern.”

Regarding the source of the dye, she adds, its origins are still being tracked down, but stresses, “there is no water safety concern.”