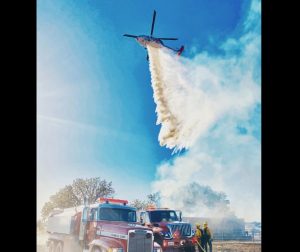 Update at 6:05 p.m.: CAL Fire spokesperson Emily Kilgore reports the forward progress of a grass fire burning along J-59/La Grange Road near Cooperstown Road, northwest of La Grange, has been stopped. The fire is estimated at 25 acres in size. Ground crews will remain on the scene mopping up for the next couple of hours. The cause of the fire remains under investigation.

Update at 5:45 p.m.: CAL Fire reports although the blaze has jumped in acreage, air and ground resources are making progress on a grass fire in the La Grange area of Stanislaus County. The fire has grown from five acres to between 25 and 30 acres. Dispatch added that one of the flanks of the fire is heading towards a creek, which should create a natural barrier, stopping the flames. They noted a good sign is that crews on the scene relayed there are enough resources to handle the blaze and no new firefighters or equipment are needed.

Original post at 5:20 p.m: La Grange, CA — Air and ground resources are working to put out a vegetation fire in the La Grange area of Stanislaus County.

CAL Fire reports that Columbia Helicopter 404 while returning to base spotted the blaze putting up a plume of smoke into the sky just after 5 p.m. The fire is burning along J-59/La Grange Road near Cooperstown Road, northwest of La Grange. The fire is five acres in size and moving at a dangerous rate of spread, according to CAL Fire, which adds that at least one structure is threatened. We’ll have an update as soon as new details come into the newsroom.