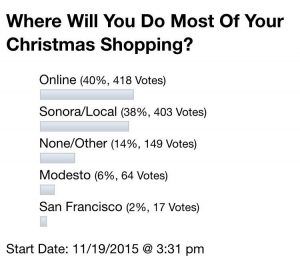 Despite the different dates, and 285 more votes this year, the results were nearly identical. Once again Online got 40 percent of the votes, Modesto got 6 percent and San Francisco got 2 percent. Those selecting Sonora were down 7 points at 38 percent this year compared to 45 percent last year. This year’s None/Other category increased to 14 percent from 7 percent but also includes those who do not celebrate Christmas as well as all the Mother Lode shoppers not shopping in Sonora.