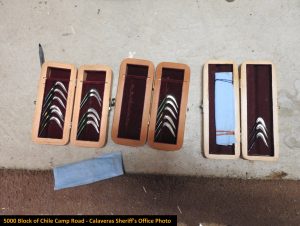 On April 20th, the Calaveras County Sheriff’s Office Marijuana Team searched an illegal marijuana cultivation in the 5000 block of Chile Camp Road. Deputies seized 1,008 growing marijuana plants with an estimated value of $65,000. Additionally, seven firearms were seized, including one that was reported stolen out of Stockton.

During the search of the property, numerous roosters and items used in rooster blood sports were located, according to sheriff’s officials. The property was searched for items related to the illegal rooster fighting activities, and deputies found gear used in cock fighting that is pictured in the image box. Calaveras County Animal Services were called in as over 160 roosters were found to be on site.

Two people were issued citations, 71-year-old Francisco Sanchez-Tinajero and 45-year-old Maria Concepcion Estrada, both of Burson. Sanchez-Tinajero was cited for running an illegal grow and Estrada for animal cruelty for amusement or gain, possession of bird fighting equipment, and possessing/keeping/training birds for fighting.

Anyone with knowledge of illegal marijuana grows is encouraged to call the Sheriff’s Office Anonymous Marijuana Tip Line at (209) 754-6870.