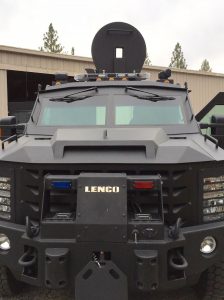 Two informal myMotherLode polls this week related to local news stories. The first a three day poll asking “Should Lethal Force by a Citizen be Allowed to Stop a Theft?” The poll relates to recent Calaveras shootings.  The second poll question was about the new Tuolumne Sheriff Dept. SWAT Vehicle.

With regard to lethal force by a citizen to stop a theft, nearly half of the votes supported it “Sometimes” with 46% of the votes. An additional 37% voted Always, and only 17% of the 665 votes were for never using lethal force.

Recently three men, Terry Glen Looney Jr. of Waterford, Wes David Smith of Snelling and Robert Daniel Haney of Modesto were shot and killed because they allegedly stole marijuana from Leon Michael Grammer. Jeremiah Lee Barrett, the brother of Grammer is charged with responding to his brother’s call about the theft and killing the men. The incident happened in Rail Road Flat near were the Butte fire burned 70,868 acres.

As stated by the late Calaveras County Sheriff Gary Kuntz in the press conference on October 21st available here in response to if a property owner can protect their property (with lethal force) he said, “You can’t. Penal law states, unless you are assaulted you can’t kill anybody to protect property.”  California Penal Code Section 187-199 available here  is about homicide and when it might be justifiable.

Burglary, theft, and stealing do not provide justification for homicide outside a home under the law, inside a home or other building it can be. Defending against a felony robbery, which involves the use of force or fear to take property can provide a legal justification for lethal force.

A recent incident in Angels Camp three suspects shot and injured a male property owner, also growing marijuana. The suspects have not been found, details are here.

The second poll question, about the new Tuolumne Sheriff Dept. SWAT Vehicle, the results were over half, 55%, voting ‘Excessive.’ Only 4% voted there is a need for more SWAT vehicles and the remaining 41% said it is ‘Necessary.’ As reported here, the vehicle was already used in Copperopolis as part of a large multi-agency task force out of Stockton that served over 24 search warrants between there and Calaveras County in one day. The warrants related to a gang member wanted on multiple homicides. The task force experienced a “surprisingly subdued day” according to Lt. Neil Evans. The vehicle can also be used as a medevac ambulance.