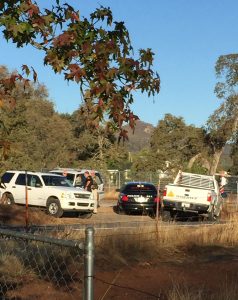 Update at 11:45am: Clarke Broadcasting has just heard back from Calaveras County Sheriff’s Dept. spokesperson Sgt. Anthony Eberhardt, who reports the following about the shooting this morning.

He states, “At about 0625 hours, the Calaveras County Sheriff’s Office responded to a residence on the 10000 block of MJB Ranch Road in rural Angels Camp for a reported shooting. The male victim encountered three unknown suspects on his property. One of the suspects discharged a firearm at the victim, striking him in the upper torso. The suspects fled the scene, possibly on foot towards Pool Station Road. The victim was conscious and alert upon the deputies’ arrival. The victim was taken to an area hospital for treatment of a nonfatal gunshot wound.”

Eberhardt adds that Calaveras County deputies, Angels Camp police officers, and California Highway Patrol (CHP) officers, including a CHP helicopter, searched the area for the suspects but did not find them.

Calaveras Sheriff’s detectives now on scene are investigating the incident, according to Eberhardt, who shares that preliminary statements and evidence gathered indicate that the shooting is related to a marijuana growing operation.

Addressing neighbors’ concerns, Eberhardt indicates that it currently appears that the suspects have left the immediate area and that anyone with any information or knowledge of the incident should contact the Calaveras County Sheriff’s Department Anonymous Tip Line at 209 754-6030.

According to neighbors who talked with Calaveras County Sheriff’s Office deputies at the foot of MJB Ranch Road around 8:30 a.m., an apparent shooting incident occurred on a property further up the rural road about two hours earlier. An Angels Camp K-9 Unit police car was among the vehicles parked together as law enforcement officials continued to work on scene. Deputies there indicated that they could not confirm any other information about the incident to Clarke Broadcasting and continued to screen incoming and outgoing MJB Ranch traffic.

Calls to sheriff’s department spokesperson Sgt. Anthony Eberhardt for more details have not yet been returned.