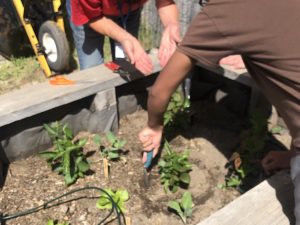 Sonora, CA – The Mother Lode Regional Juvenile Detention Facility in Sonora off Wards Ferry Road is using gardening as a mental and physical health tool, and now the detained youth have some ideas of their own for a new project.

“This is a whole new thing for me. I’ve never thought about gardening or where our food and produce comes from. It’s really interesting to see all the bugs on the food, ” said a female youth at the facility.

UC Cooperative Extension’s 4-H Youth Development Advisor for Tuolumne County, JoLynn Miller, and volunteers began visiting the facility weekly in 2017 to help the detained youth develop a garden. Miller detailed, “When I first started, it was to really give these youth an opportunity to connect to anything that gives them a spark that they can put their mind and their focus on. So, they have a passion that they can pursue to keep them occupied and keep them out of trouble.”

The female detainee says the garden also helps to calm her when she gets anxious. In 2018, the youth actually helped with procuring a grant from the Farms of Tuolumne County (FOTC) to add another three wooden garden boxes, for a total of five, allowing for more planting.

“I definitely look forward to the new plants that they bring every week, like ghost peppers, and one time they brought garlic,” stated the female detainee. “We also got carrots, basil, mint, cabbage, and lettuce. So, it’s kind of like a little surprise.”

When Clarke Broadcasting visited during the gardening time, the youth were checking on their carrots with much excitement. One reason Jim Bliss, a former Pastor, and Master Gardner volunteer, says he gives of his time.

“I’m able to interact with them on a much different level because I have no expectations of them, they have no expectations of me, and I’m not selling anything but carrots, and you can see how well the carrots went over from watching them.”  shared Bliss, adding, “I think what people need is an honest relationship with another person. Then you teach just by being there.” Something the female youth acknowledged, “People don’t have to volunteer and spend their days here, but they choose to do it because we love it and respect it.”

The big thing, noted Bliss, is to show the teens’ work ethics. “I had kids digging a two-foot hole looking for leaks because we took out all the sprinklers and we changed it over to drip to conserve water. So, they’re learning about conservation, hard work, and how a seed can turn into something that is just amazing.” He continued, “I get a big kick out of people experiencing joy, and there is a lot of joy in a garden.”

Growing is just one part of the lesson; eating is another, stated Miller, explaining, “They’re taking all of the things that they’re growing and they’re learning how to cook with them. They’re making meals out of them. They’re learning that they can be almost self-sufficient. They know they can grow something from a seed and then cook it and eat it. It’s a really cool cycle.”

Last year, the youth came up with another idea, writing and securing another grant from FOTC to build a new pollinator and meditation garden in another area of the facility, currently just a cement and grass area. The female youth drew up the plans for the garden. Miller described it this way: “We’re going to put in flowering plants for pollinators, butterflies, bees, things like that. Then we’re going to put in a water feature and use it as a meditation place, so the social workers and the counselors working here can potentially even use it when they’re working with the kids to teach them how to calm down. Water has a really great calming presence.”

That grant has also been awarded, but there is a snag. As Miller explained, “We thought a light post near where we wanted to put the pond had an electrical outlet, but it doesn’t. The grant money is already being used to purchase other parts of the pond, so we’re looking for an electrician. ” She offered, “We might be able to buy the supplies if they could give us the time and help us do this. We would really appreciate it.” Anyone interested in volunteering their time as an electrician can contact Miller at jlmiller@ucanr.edu or 209-533-5686.

Bliss can attest to the joy of giving, recounting a recent encounter he had with a former detainee, “For about three weeks, one of the young men was coming in to see his parole officer at the same time we were in the garden. He said, ‘I wish I was out there, but I’m glad I’m free.” I think that that’s the whole point—people have to have a reason to make their lives better.”