From The Butte Fire Ruins Recovery Ramps Up 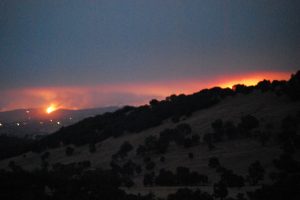 San Andreas, CA — In Mountain Ranch, the hardest hit of three Calaveras County communities ravaged by the Butte Fire, residents gather tonight as local recovery efforts ramp up in the wake of the devastating blaze.

According to District 2 Superintendent Chris Wright, whose area includes the three communities that were ravaged by the historic disaster, Cal Fire is scheduling three home turf meetings this week in response to multiple requests, rather than in the county seat of San Andreas, where most have taken place to date.

Asked if he expected more questions in the vein of some criticisms heard at last week’s community meeting at Bret Harte High School, Wright states, “I’m sure that if people have more questions regarding the events that occurred during the fire, like the evacuation notices, that we’ll address them.” At last week’s gathering, as previously reported,  a number of residents complained that some of the evacuation notices provided little advance warning. Another vocal critic described watching a backfire that was purportedly lit for fire protection subsequently ignite a residence, and a second incident where he said firefighters were taking “selfie” cellphone photos as flames burned property.

Wright acknowledged the many challenges that responders faced as the Sept. 9 disaster exploded out of control, exponentially growing in the tinder-dry, fire ripe conditions that suddenly endangered district without much warning. “The fire was just an uncontrollable beast at that point,” he says, simply. In discussions with several fire specialists, he recalls, every one of them anticipated that the blaze would burn in the direction of Mokelumne Canyon. While he points out, “It did go up there somewhat…but instead, veered off south towards Mountain Ranch, which they didn’t predict happening.” Although Mountain Ranch bore the brunt of the massive devastation, “The fire got really, really close to Mokelumne Hill — it was kind of a modern miracle it didn’t take down the historic town itself,” he states with obvious relief.

Attempting to describe driving through the now fire-blackened parts of his district, Wright shares, “It’s beyond words, really…it’s just devastating, once you get outside of Mountain Ranch a little ways — even on the way…there’s some heavy-duty damage that’s happened, a lot of houses that have been lost.” In recounting the losses he says, “Hundreds and hundreds of homes have been destroyed out in between the communities of Mountain Ranch…heading towards Mokelumne Hill…it’s just miles and miles of devastated landscape with burnt out homes.” Then, he says, there are the hopeful signs, “Where you see a few houses that did make it…and so that is a little bit of positive news. But it’s overwhelming; the scale and intensity of the destruction…over 500 homes.”

Wright comments that, while recovery is going to take a long time, “We’re already seeing people starting the process and my hope is to help as many people as we can stay here and rebuild as quickly as possible.” Patience and persistence are both key over “the long haul,” as he describes it. “But eventually, this is a very resilient…strong community and I’m sure that we’ll recover,” he states. Wright indicates that a majority of the residents he has spoken with are, in fact, looking to rebuild. He also thinks that a majority have already contacted the county to work through the process. “The county staff has been absolutely amazing in helping folks, and now FEMA is here, too,” he adds. While FEMA funds are still forthcoming, according to Wright, Red Cross has given out small amounts of money and county Health and Human Services is signing up eligible residents for assistance.

For Butte Fire victims, Wright states, “The most important thing that I can stress is, if you have any questions, looking to clean up your property, rebuild, if you need any kind of assistance, then start down at the county administrative offices in San Andreas, and work your way out from there. Red Cross, FEMA…all of the county agencies are here — and everyone is geared up to help people. If you feel stuck at all, either give me a call or give the county a call and we’ll help you get unstuck.” Residents can reach Wright directly at 209 304-3729.

Moving forward, Wright says that regional, state and federal efforts are needed to help reduce the fuel loads on overgrown lands that are now drought-parched, to boot. “[The Butte Fire] burned so fast and so hot because of the lack of management in some of these areas,” he emphasizes. “So, somehow as a greater community, we have to figure out how to get the funds available to clear these properties and restore them into natural functioning forests, so when a fire comes through it’s not catastrophic like this.”

While there has been plenty of discussion on the topic, Wright declares, “There hasn’t been enough…ground work…I don’t think the drought is ending anytime soon, and while — fortunately, we may get some rain and snow this year, it’s still going to be a really bad fire situation out there, for years to come.”

Essentially, the last 40 years or so, there has been no management of these areas, Wright points out. Fires, just within the Sierra Nevada over the past decade, have burned five million acres, he says, creating a situation that has become a statewide emergency. Wright surmises, “It’s because the scale is beyond what any local government can do…it’s going to require national and federal help.” Moving forward, he says, part of the recovery conversation beyond Calaveras is to address necessary, serious changes regarding land management.