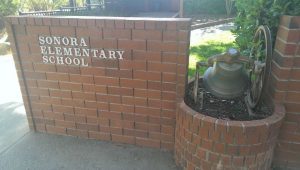 Sonora, CA – Police are stepping up patrols around Sonora Elementary after recent reports from students of people walking along a campus fence, with one individual allegedly taking photos while watching them at recess and another possibly carrying a gun.

Concern over these reports had the school’s Principal, Chris Boyles, send out this email to parents last Thursday (4/14):

This note is to inform you of a recent set of events in the past week involving the open field on the back side of our campus, outside of our perimeter fences.  Over the past week, Sonora Elementary students and staff have reported what appears to be individual(s) who have taken residence in this field, in the wooded areas.  Having a visual of these individuals have caused distress to our students, particularly our 2nd – 5th grade students, who are playing at recess.

Last week, it was reported multiple times by students and staff that an individual was near the fence line, walking and sometimes stopping by the fence line.  Student reports involved an individual taking photos of the students with a cell phone.  When reported, I responded to the scene, but could not get a visual on what was being reported.  Even though I could not confirm this report, I thought it would still be appropriate to call the Sonora Police Department and they sent an officer to address the matter.  Sonora PD stated they confronted an individual who appeared to take residence in the wooded area, up the hill and away from the fence line.  Sonora Police directed the individual to stay away from the fence and to not engage with the students from afar.  The individual stated that he had not done so.

Today, a group of 2nd grade students reported that they saw a man in the field with a gun, which led Sonora Elementary to contact Sonora Police again.  Officers arrived and combed the area and found no threat to the campus.  I continued to monitor the field and witnessed a couple of individuals walking on trails and walking near the fence, but never stopping to engage students or anything of danger.  In addition, it appears a vehicle has parked in the wooded area, close to our campus.

Over the many years I have been here, when we have had individuals walking the trails or squatting in this area, it has caused much distress to our students, which has led to a bit of embellishment in their reporting.  With that said, we still have to be diligent and follow up with any claims that are made.  We will continue to work with the Sonora Police Department in this matter and our campus supervision, teachers and administration will continue to monitor this area to ensure our children are safe.

Clarke Broadcasting reached out to Sonora Police Department (SPD) spokesperson Thomas Brickley regarding these reports, especially the one involving a firearm. Brickley relayed, “Officers responded to the area that day. They did a thorough search of the school and the surrounding area, but they were unable to locate anybody that was in possession of a firearm. ”

The first report received by SPD from school administrators was on April 8th. At that time, officers responded and found no crime had been committed. Brickley advised the trail has been cut by foot traffic through a field behind the campus fence. One person contacted by officers admitted to being homeless and living in that area. Regarding what steps the department is taking, Brickley detailed, “We’re stepping up patrols to show an increased police presence in the area, as well as anybody that seems out of place. We’re then contacting them, identifying them, and seeing if any crimes are being committed. Also, our homeless liaison is working with property owners in the area to identify and use the actions that we can to alleviate any concerns.”

The SPD also reminds parents and students that “we would like to stress to the public that if you see something out of the ordinary or your child feels uncomfortable, please notify us or somebody at the school or an adult and we will send officers out there,” adding, “Also, we want to make sure that juveniles remember the rule of not talking to strangers.”