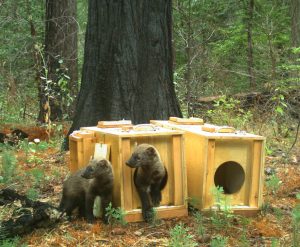 Yosemite, CA — Four orphaned fisher kits were released yesterday north of the Merced River in Yosemite National Park. The young rescued animals are the species known as fisher, or Martes pennanti, which is a carnivore grouped with other weasel type animals. Two sets of orphaned siblings were rescued by PSW researchers Craig Thompson and Laura Van Vranken after two radio-collared mother fishers were killed by predators.

Estimated to be approximately eight weeks old, the kits were taken to the Fresno-Chaffee Zoo to be cared for until they could eat solid food. They were then moved to an outdoor facility near Oakhurst run by the Fresno Wildlife Rehabilitation Foundation where they have since grown and learned to hunt live prey.

The release of the two sets of orphaned siblings, now approximately six months old, back into the wild is part of a four-year effort to reintroduce fishers north of the Merced River in Yosemite National Park. Historic records show that fishers once occupied this area but trapping and logging in the late 1800s and early 1900s likely led to their local extinction. Despite over 70 years of protection, fishers have failed to successfully recolonize the area.

Biologists hope that human-assisted migration north of Yosemite Valley and across the Merced River barrier may help. National Park Service and Forest Service biologists will work together to monitor these four kits. If they survive at rates similar to other juvenile fishers, the population will be augmented in the following years with additional orphans that would have otherwise died if they had not been rescued by researchers.

The small, isolated population of fishers in the southern Sierra Nevada is listed as threatened by the state and is under consideration for federal listing. This is due to fire, habitat loss, and other environmental threats. For an earlier news story about fisher in Yosemite read “Unusual Find At Yosemite National Park” here.