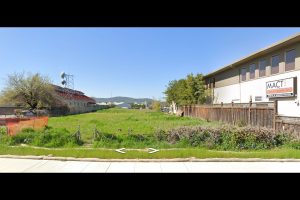 Site for the proposed additional MACT facility in Angels Camp

Angels Camp, CA — The M.A.C.T. (Mariposa, Amador, Calaveras, and Tuolumne) Health Board is looking to build a new administration building and Native American museum in Angels Camp that will include a mural along Highway 49.

The group’s current building is located at 64 South Main Street, off the highway. It is asking the city’s planning commission to grant a site development permit for the nearly one-acre vacant lot, seen in the image box, zoned “Community Commercial.” The plan is to build a more than 12,000-square-foot, two-story administration and cultural building on the lot with the museum on the bottom floor. There will also be a pedestrian walkway to connect the old building to the new one. City Planner Amy Augustine detailed what it would house, stating, “Historically, there was a gentleman who received payment sometimes in Native American artifacts. So, they would like to display those things, like baskets.”

If approved by the planning commission at its Thursday (April 14) meeting beginning at 6 p.m. in the firehouse located at 1404 Vallecito Road in Angels Cam, then the city council’s approval is also needed, but not for the entire project. Augustine noted, “The City Council must approve a long-term lease for a portion of city property adjacent to the site for continued parking. The city council will have to approve just the land used for parking. We are proposing a 25-year lease at this time.”

There is no word on when construction might begin if the company gets those needed approvals.