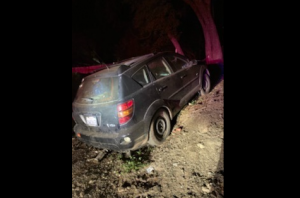 Jamestown, CA — This week a sheriff’s deputy did a record check on a Pontiac Vibe spotted near Highway 108 and Mill Villa Road during the early morning hours.

There was a man and woman inside, and the male driver accelerated and took off. There was a high-speed chase where the driver went over the double yellow lines, ran stop signs, and eventually turned into a dead-end parking lot in the area of the Royal Carriage Inn. The woman inside jumped out and took off running and the driver then attempted to swerve around the patrol vehicle, hitting it multiple times.

He then tried to drive over a nearby dirt hill and became stuck. He took off running and was captured. 32-year-old Ryan Wardwell had six misdemeanor warrants and was on parole.

The investigation then led to a nearby hotel room and officials arrested another man, 26-year-old Shea Green, who was trying to escape through the bathroom window. Green had six misdemeanor warrants and four felony warrants.

During the probation search deputies located approximately 83 grams of Fentanyl concealed in a false compartment of an aerosol can, 16 grams of psilocybin mushrooms, 3 grams of methamphetamine, drug use paraphernalia, a digital scale and just under $1000 cash.