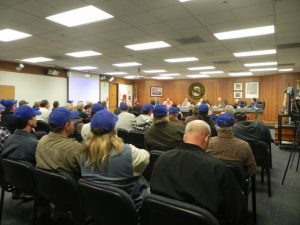 Sonora, CA — At its next meeting, the Tuolumne County Planning Commission will vote on the planned expansion of the Blue Mountain Minerals agricultural fill area.

The company, on Marble Quarry Road, is hoping to expand its agricultural fill area by 27 acres. The Tuolumne County Supervisors approved a Draft Mitigated Negative Declaration for the project in January of last year, but it was met by a lawsuit from the Twain Harte based Central Sierra Environmental Resource Center (CSERC). Blue Mountain Minerals then chose to complete a full draft Environmental Impact Report. Up for review at the Planning Commission meeting is the same project that was proposed last time around, but the environmental review process was expanded.

Tuolumne County Community Resources Agency Deputy Director Mike Laird says, “We did receive quite a few comments on the draft EIR. A substantial number, probably 45 out of 50, were in favor of the project. They came from members of the business community, and other people that support Blue Mountain Minerals. There were also some critical comments regarding the proposed expansion, namely from the Central Sierra Environmental Resource Center and their legal firm.”

The Planning Commission will decide whether the project can move forward. That said, any decision the group makes could be appealed to the Tuolumne County Board of Supervisors.

On a different matter, the Planning Commission will decide whether to issue a Conditional Use Permit for a 108 ft. tall wireless telecommunications tower, equipment shelters, and related equipment within a 50 x 50 ft. fenced compound. It could theoretically be utilized by multiple wireless service providers. The tower would be located near Tenaya Elementary School in Groveland. The applicant is 4-C Properties.

The Planning Commission meeting will start at 6pm on August 19th in the Board of Supervisors meeting room at 2 South Green Street.