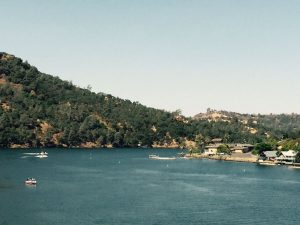 Copperopolis, CA — Beginning today, notices are going out that a gradual draw down of Lake Tulloch waters to lower downstream fishery temperatures may begin as early as Aug. 23.

What this might mean for the Labor Day weekend holiday, which follows two weeks later and is generally considered as the end of the lake’s recreational season, remains uncertain, for now.

It depends both on the demand of Tulloch’s colder waters and ambient temperatures as they occur, according to Steve Knell, general manager of the Oakdale Irrigation District (OID), which is one of the Tri-Dam Project partners that developed and who maintain and operate the water system that includes Tulloch.

The Tri-Dam Project is now notifying landowners, businesses and governmental agencies of its plans to coordinate mixing of Tulloch’s cooler waters with releases by the U.S. Bureau of Reclamation from the low-level outlet at New Melones Reservoir.

The releases are part of a multi-agency operations drought-response plan developed to meet adapted regulatory requirements pertaining to endangered species, water quality control and other beneficial uses. A temporary urgency change petition previously approved by the state water board only addressed project operations until this month. The project partners state they have maintained water surface elevations at Tulloch as long as possible through the summer of what is now the state’s fourth year of drought.

Specifically, they say that the mixing of waters from both lakes will allow Reclamation and Tri-Dam Project to reduce water temperatures affecting rainbow trout below Goodwin Dam on the Stanislaus River. Altogether, the reservoir will be drawn down 30,000 acre-feet, which is approximately 20,000 acre-feet more than normal.

Clearly unhappy with the news, the Lake Tulloch Alliance, an association of area homeowners that remains at odds with current fish flow requirements and policies, call the plan irresponsible. Along with criticizing the Tri-Dam Project for not opposing implementation of the releases, spokesperson Jack cox states, “The lowering of Lake Tulloch during the prime summer season is going to have a profound impact on the economy, ecology and the people.” He adds that a Tri-Dam official made it clear to his organization that the community comes secondary to “making money from power generation and selling water to users.”

Knell describes the drawdown plan will look similar to a normal lake drawdown, except that it will begin earlier than usual. Normally the waters begin to lower in the latter part of September or early October. At no point, he says, will the waters go below the level at which gate exercises are operated. As reported earlier, plans are to run the legally required exercise later this fall, as the waters are going to be close to the level needed to do so. Doing so will fulfill the requirement through 2020.

“The intention here, is to put notice to folks that the lake is going to go down,” Knell explains. “We don’t know [when] it can start as early as the 23rd, it could be delayed — like I said, it all depends on temperature.” But, he cautions, “People who have docks, who may be impacted by these low elevations, should take action to make sure the docks are safe — or if they have watercraft, or whatnot — that pretty soon, they are going to have to get those potentially off the lake, if the lake drops below the boat ramps.”

Knell advises those with docks and or watercraft should expect to do as they did, three years when the exercise was last run. Similarly, “The water supply should not be affected any more than during the last gate exercise,” he states. He also indicates that Tri-Dam Project will regularly post details about related activities and critical elevations at the lake on its website, which may be accessed by clicking here.

The partners say Tulloch’s refill is expected to commence, as normal, on March 1, 2016.