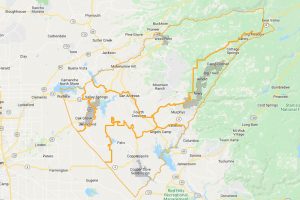 After holding several public meetings regarding redistricting, the CCWD board settled on the map in the image box and adopted the new district boundaries earlier this month. The five-member board of directors each represents a portion of the county and is elected by the voters in that district.

As earlier reported here, after the federal census is completed every decade, CCWD reevaluates its district boundaries to ensure relatively equal population distribution. “CCWD strives to keep communities intact when drawing the boundaries and also takes CCWD service areas and watershed boundaries into account, to the extent possible,” relayed district officials. Click here for more details on the map.

In Tuolumne County, TUD has offered this new mapping of proposed “district-based” election boundaries. It will hold another public hearing at its next board meeting on Tuesday, April 26, at 9 a.m. To give feedback and view the draft maps, click here.