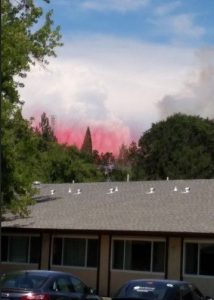 San Andreas, CA — It was a mower that ignited yesterday’s six-acre vegetation fire near the Calaveras County Law and Justice Center.

An inmate crew from the jail was conducting some fire prevention work. San Andreas Fire Department Chief Don Young said, “They had a mower that they were getting ready to put away and must have had some dust particles or small piece of brush, or whatever that got up on the exhaust manifold and started the fire.”

As reported yesterday, the flames broke out just after 2 p.m. on a property located in the 1000 block of Jeff Tuttle Drive, immediately adjacent to the jail and between the facility and Gold Hunter Estates. Flames did briefly threaten a home in the subdivision but Chief Young stressed, “There was a lady they asked to get back [but] the crew was quick to get on it, though. There were no evacuations and no danger to the jail — the fire was actually blowing away from the jail.”

Although the chief acknowledges the work was to benefit firefighters in case of a blaze, the timing was a problem.  He warns, “The one caveat to the whole thing is that, if you’re going to do land clearing this time of the year, start as early in the morning that you can, and by 10 o’clock be done, because your moisture level in the air goes down as the day progresses.  By the time you hit 2 o’clock, you’re in a critical time zone, and that’s about the time the accident happened.”

When asked if the Sheriff’s office should have known better, Chief Young replied, “It’s not up to me to find fault on something like this.  Fortunately there was no loss of life.” Clarke Broadcasting reached out to Calaveras Sheriff Gary Kuntz, but he was not immediately available for comment.