Nearly $8 Million Worth Of Marijuana Seized In Illegal Grows 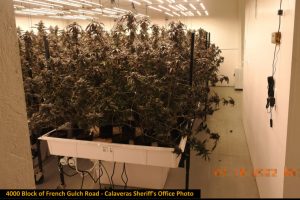 Calaveras County, CA – Three illegal grow raids on two days last week resulted in an estimated $8 million worth of marijuana being seized, and one of the properties involved used to be a Murphys dog kennel.

The searches, two on Thursday and one on Friday, were conducted by the Calaveras County Sheriff’s Office Marijuana Team. The first was in the Murphys area at the former Aloha Boarding & Training dog facility on the 4000 block of French Gulch Road near Murphys Grade Road. The kennels and other buildings had all been converted to indoor grow areas with 4,112 growing marijuana plants and 144 pounds of processed marijuana found.

Sheriff’s spokesperson Lt. Greg Stark relayed, “In addition, the large amount of juvenile marijuana plants indicated that this site was a nursery that may have been a supplier for other cultivation sites.”

A second raid on Thursday took place in the 2000 block of McClintock Court in Valley Springs with a metal shop being used for an illegal grow. That facility was also tagged for building code violations. Deputies seized 1,208 growing marijuana plants and several pounds of processed pot. Two suspects, Mei Juan Liu, 38, of Valley Springs, and Da Ghuang Wu, 46, of Valley Springs, tried to run from deputies but were quickly caught. They were cited for several drugs charges including maintaining a drug house.

The third search was in Burson on Friday in the 5000 block of Wilkinson Lane where deputies seized 695 growing pot plants and 189 pounds of processed marijuana. The cultivation was being done inside the home. It was also found to have code violations related to mold infestation and electrical hazards causing the power to be shut off.  Two firearms were discovered in the house, but no suspects.

Anyone suspecting an illegal grow within the county is asked to call the Sheriff’s Office Anonymous Marijuana Tip Line at (209) 754-6870.