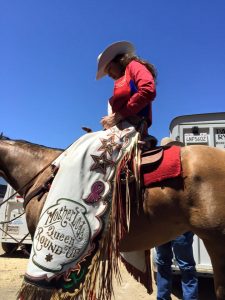 Sonora, CA – A broken car window was all it took for a thief to take off with the Mother Lode Round-Up Queen’s custom-made leather chaps.

The theft happened Tuesday night in San Francisco. Queen Paige Ryan was staying at a friend’s apartment in Pacific Heights. When she went to her car to head to a scheduled meeting, she recounts being horrified to find a window broken out and her garment bag with the chaps gone. “There’s not much you can do,” Ryan says sadly.  “You feel powerless. My items are gone. It’s pretty paralyzing and there’s nothing you can do…You know they’re gone.”

Ryan had the chaps with her, as she had just worn them for the first time in the Livermore Rodeo this past weekend, while representing Tuolumne County. She did not get much hope for their recovery from San Francisco Police. Officers told her, she says, “It’s likely it was a professional that broke into my car, based on the fact that my car was just outside of a security camera’s range. The security footage showed no one coming near my car the entire evening. They told me with that specific of an item it could be anywhere and anything could have happened to it.”

The chaps, which she and the Sheriff’s Posse designed, were part of her winnings after she was crowned Queen in May. John Gentry made the chaps, which are white with red, black, gold, and green trim on the legs, featuring tooled tops, stars, and a pink ribbon.  Emblazoned with “Mother Lode Round-Up Queen” and Ryan’s name, the chaps were in a purple and grey padded garment bag with the words “Paige Ryan Kansas State Equestrian” embroidered on it.

A photo of Ryan wearing the chaps can be viewed in the upper left image box. The chaps, which can cost anywhere from $800 to 1,300, have Ryan worried about the added expense for the Sheriff’s Posse, as, if the chaps are not found next week, new ones will have to be ordered.

Ryan’s story also aired on a San Francisco TV station Wednesday night, which she hopes might increase the chances of the chaps turning up. She makes this plea to the thief. “I would really just like to ask for them back. I’m really not here to be a judge or a jury, or to get mad at anybody. I would just like my chaps back. They’re irreplaceable.”

Ryan plans to start a campaign asking for donations to help pay for the chaps if they are not returned.