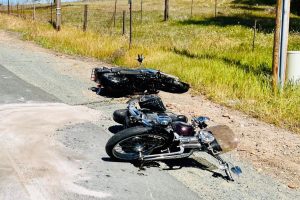 Wallace, CA – A pile-up on Highway 12 In Calaveras County resulted in two motorcycles colliding and one rider being flown from the scene.

The crash happened on Monday (March 14) around 11:45 a.m. in front of the Sierra gas station near Camanche Parkway South in Wallace. The CHP reported two motorcyclists, 71-year-old Dennis Willis from Stockton and 59-year-old Thomas Touchstone from Woodbridge riding Harley Davidson bikes were westbound on the highway. Meanwhile, Charles Piece from Elk Grove was driving a Toyota 4Runner SUV in the opposite direction.

“Willis lost control of the bike on a corner and drifted into the eastbound lane where it sideswiped the SUV,” detailed CHP spokesperson Officer Toby Butzler, who added, “On the other bike, Touchstone was unable to avoid the downed rider and motorcycle crashing into them. Willis was flown to a Modesto hospital from the scene with major injuries.”

The highway was closed for about 45 minutes to facilitate patient care and clear the scene. Butzler noted that drugs or alcohol are not suspected to be a factor in this crash.