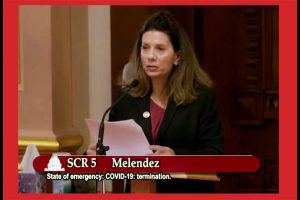 Sacramento, CA — A resolution that would have ended Gov. Gavin Newsom’s emergency powers regarding the COVID pandemic did not make it out of committee.

An 8-4 vote yesterday (Tuesday, March 15) by lawmakers in the Senate Committee on Governmental Organization has stopped the Senate Concurrent Resolution also known as SCR-5 for now. The resolution was introduced in December by State Sen. Melissa Melendez, R-Lake Elsinore.

“California has been under a state of emergency for more than 700 days,” detailed Melendez. “As infection and hospitalization rates continue to drop, it’s time for the state to allow local governments to take the lead and address emergencies locally without the shotgun approach of a statewide emergency.”

Newsom signed the state of emergency on March 4th of last year. Melendez noted that passing SCR-5 would restore the constitutional balance between the three branches of government.

“It is time for the legislature to reassert its constitutional authority as the legislative body of this state and end this endless emergency,” added Melendez.

Those who voted against the bill worried ending the state of emergency could hamstring the Legislature’s ability to fight the pandemic efficiently. Also adding that the governor has already lifted all but five percent of the COVID-19 related executive order provisions.

The resolution was also opposed by several organizations, including the California Professional Firefighters and the California Hospital Association. The latter pointed to the continued need for emergency waivers that allow flexibility to create additional emergency space and bring in out-of-state health workers during virus surges while also providing access to emergency federal funds.

In the end, the committee granted reconsideration to Melendez, which will allow the resolution to be brought up for another vote later.