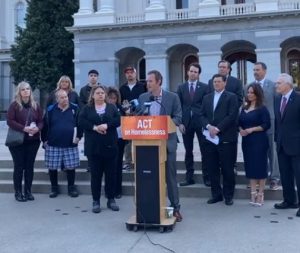 Sacramento, CA — Citing that California has spent $17-billion over the past four years on homeless programs, but the issue continues to grow, California Republicans have released a package of legislation.

Assembly GOP Leader James Gallagher called it the ACT (Accountability, Compassion and Treatment) initiative at a press conference this morning at the capitol.

Criticizing the status quo, Gallagher said, “Leaving people with mental illness or addiction to deteriorate on the streets isn’t compassion – it’s the exact opposite. Throwing money at the problem won’t fix it. Neither will small tweaks to existing programs. It’s time for bold changes that will finally make a major difference to one of the biggest crises facing our state.”

More details on the GOP plan can be found here.

California Governor Gavin Newsom recently announced a $14-billion proposed homelessness package that he says will create 55,000 new housing units, among other things, over the coming years.