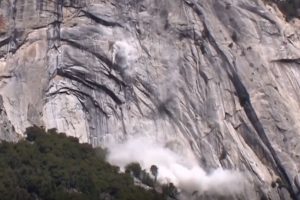 Yosemite, CA – Calling last year a “relatively mild year” for rockfalls, Yosemite National Park officials point to another natural occurrence that created the most damage in the park.

Forty-seven rockfalls were documented in 2021, equaling around 4,670 tons of rocks. That amount is actually below recent averages, indicated park officials, who believe below-average precipitation last year may have played a role in lowering the numbers.

El Capitan recorded two of the heftiest slides. The largest was a nearly 3,000-ton slab. While there was no witness to its drop from low on the west face, park officials say it likely happened during the heavy rains in October. Another 160-ton slab, fell the next month, Nov. 16th, from the southeast face. Other substantial 2021 rockfalls happened at the Parkline Slab, Sentinel Rock, Sunnyside Bench, Glacier Point, Porcelain Wall, and Royal Arches.

Rockfalls were not the most damaging natural occurrence to hit the park last year, officials noted, “The most consequential event of 2021 was a series of debris flows, water-laden sediment flows, that damaged portions of the John Muir and Mist trails.”

An afternoon thunderstorm at the end of June dumped rain over eastern Yosemite Valley, triggering several debris flows between Happy Isles and Vernal Fall. Park officials detailed, “The largest debris flow cut a 2-meter-deep gully through the John Muir Trail, depositing about 150 tons of sand, gravel, and boulders onto the Mist Trail below.” There was also smaller (90 tons) debris flows that damaged the stock trail between Happy Isles and the Vernal Fall footbridge.

To help the park document rockfalls, visitors are asked to report them, including fresh rock debris, or cracking or popping sounds coming from the cliffs, to park geologist Greg Stock at 209/379-1420 or greg_stock@nps.gov, or contact Park Dispatch by dialing 911 within the park. That information, say park officials, enables long-term evaluation of rockfall activity to improve public safety, as detailed here.