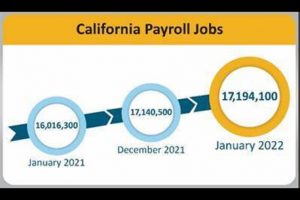 California’s jobless rate remained 5.8% in January adding 53,600 jobs, as the state’s economy is slowly returning to pre-pandemic levels. The latest numbers out Friday from the Employment Development Department (EDD) showed California outperformed the rest of the country with a 7.4% job growth rate last year compared to the national average of 4.6% for 2021. Currently, the state has regained 82% of the roughly 2.7 million jobs lost by the state in March and April 2020 due to the pandemic closures.

Governor Gavin Newsom touted the numbers, emphasizing, “California’s economic recovery last year was unprecedented, creating over 1.17 million jobs and running far ahead of the nation’s job growth. Our approach has been to follow the science while supporting those hardest hit by the pandemic, and it not only saved tens of thousands of lives – it got our state back to work faster and better than the rest of the country.”

The Mother Lode numbers did not follow that trend, instead, both Tuolumne and Calaveras saw their jobless rates climb. Tuolumne increased from 5.2% in December to 6.1% in January, leaving 1,200 unemployed in its workforce of 19,690. Calaveras jumped from 3.9% to 4.7% for the first month of the year with 1,010 unemployed out of a 21,360-labor force.

Eight of California’s 11 industry sectors gained jobs in January with Trade, Transportation, and Utilities posting the largest gain at 26,600, primarily within the General Freight Trucking industry subsector. Those groups along with Professional and Business Services have regained all the job losses incurred by the COVID-19 pandemic. Local Government Education saw the most job losses at 800.

While concerns over the rising inflation loom, which includes soaring gas prices, to date that economic uncertainty has not impacted the state’s tax revenues. The nonpartisan Legislative Analyst’s Office is even suggesting that tax collections will be significantly higher than expected this year, with a net surplus of between $6 billion and $23 billion. State Democratic lawmakers are already considering some type of tax relief for citizens. Also, Newsom, during his State of the State Address proposed giving taxpayers a rebate to help offset the high cost of fuel, as earlier detailed here.