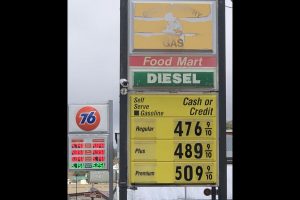 Sonora, CA —  Since Monday, the national average for a gallon of regular gasoline has increased by 11 cents to $3.72, according to AAA.

The agency relayed that coupled with a decrease in domestic gasoline stocks and supplies along with a jump in demand, is contributing to price hikes.  The major contributor to the hike at the pump, says AAA, is the continuing rise of crude oil prices. At the close of Wednesday’s trading session, crude oil increased by $7.19 to settle at $110.60 – the highest settlement price since May 2011. That hike is being felt at the pumps. In Tuolumne County, Sonora’s highest gas price is $5.09 and in Groveland, it is $4.95. In the San Andreas area of Calaveras County, the top pump price is $5.   Check out the lowest prices in the Mother Lode here.

California pays some of the highest prices at the pump due to taxes. The most recent was a 12-cent hike, approved by voters under former Governor Jerry Brown for road repairs. There is a current push to suspend the gas tax by state GOP leaders.

“This is a crisis of Democrats’ own making – from their war on domestic energy production to the taxes and mandates that add $1.27/gallon to the cost of gas, their actions mean Californians are paying far more than they should,” charges Assembly Republican Leader James Gallagher (Yuba City). “If Democrats really care about bringing down the cost of living for working Californians, they will join our effort to suspend the gas tax and bring costs down by fifty cents a gallon overnight.”

AAA advises that crude prices will continue to surge as the conflict between Ukraine and Russia brings uncertainty to the market, as Russia supplies about 12% percent of global trade. In an attempt to offset rising prices, President Joe Biden announced that 30 countries have teamed up to release 60 million barrels of oil from reserves around the world with half of that amount contributed by the U.S. Other countries include Germany, Canada, South Korea, and Mexico, but there were no details on how much they supplied.

“A potential ban of crude imports from Russia to the U.S. or other countries will likely cause prices to continue to rise to reflect more risk of disruption to tight global oil supplies,” noted AAA officials.