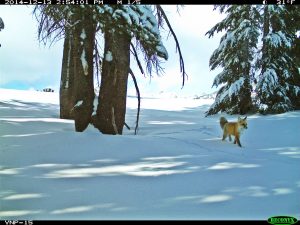 Yosemite, CA –   A motion camera in Yosemite National Park snapped a shot of one of the most endangered mammals in North America.  It is believed that there are fewer than 50 individual Sierra Nevada red foxes according to Park spokesperson Ashley Mayer.  She says, “This is an exciting and rare find…This is the first time in nearly 100 years that one has been documented in the park.”

Two pictures were taken of a fox in the far northern part of the park, one in December and the other January 4.  Mayer says one shot was at night was blurry, but the other, which can be seen to the left, is a day shot with the fox clearly in view.  Mayer says the next step will be to document the fox.  “There are now stations set up, hoping that we may be able to capture a piece of hair from the fox and do some genetic analysis to see if it’s the same fox and if there is any relation to a population that has been documented over in the Sonora Pass area.”

The U.S. Forest Service first documented the Sonora Pass population in 2010.  Prior to that, the last confirmed sighting of the fox in this region was two decades ago.  As for visitors getting a glimpse of the elusive fox in person, that would be a truly rare experience according to Mayer, as it sticks to the high country.