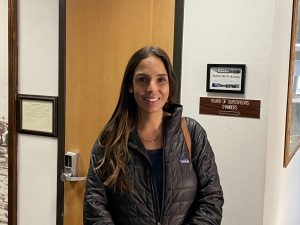 Sonora, CA — A local woman protesting mandatory mask-wearing, notably for school children, led to the Tuolumne County Board of Supervisors canceling the majority of today’s meeting.

During the public comment period, one of the speakers was Kali Callahan, who requested that the board work with the public health department to end COVID protocols in the schools. She argued that Governor Newsom being photographed over the weekend maskless at an NFL football game shows that the “state of emergency is over.”

Callahan is a former elementary school teacher and the parent of four school-aged children.

She cited that the American Academy of Child and Adolescent Psychiatry, and the Children’s Hospital Association, declared a national emergency on children’s mental health because of the toll of the COVID pandemic in addition to existing challenges.

During her comments, Callahan pulled down her mask to speak, but she was asked by Supervisor David Goldemberg to place it back up, which she did.

Later, while seated, she decided to take the mask off. She told Clarke Broadcasting afterward that it was done in protest for local youth.

About an hour into the meeting Goldemberg interrupted and requested that board chair Anaiah Kirk enforce the meeting mask policy, stating, “We have our rules, and I’d appreciate that you enforce them.”

Kirk responded, “My attitude towards masks is that we are all adults, and I’m not Newsom’s COVID police.” Kirk then recommended that people in the room who are uncomfortable should move six feet away from anyone without a mask.

County Counsel Sarah Carrillo then pointed out to Kirk that there is a state indoor mask order that the county is required to follow.

District Two Supervisor Ryan Campbell stated that he agrees with Supervisor Goldemberg and recommended that the meeting be stopped until all audience members agree to wear masks. He added, “We are a board of laws and policies, and I think we should follow them if we are being true to ourselves.”

Kirk responded, “I don’t agree,” and said he feels it is “ridiculous” to stop board business because of someone not wearing a mask.

Supervisor Jaron Brandon then chimed in, “We have a policy on the books and I don’t think it sets a good example for us to not follow or enforce our own policies.”  Adding, “We do have people that feel vulnerable (desiring mask rules) and they do have the right to petition and address their government.”

Seeing that majority were in favor of pausing the meeting, Kirk obliged.

Callihan stayed at the meeting and declined to wear a mask. The meeting was reopened and quickly closed again when the board could not agree how to proceed.

In the end the supervisors agreed to cancel all but a closed session item on the agenda so that they could reset and discuss how to address masking protests at the next meeting.

Callahan left after the meeting concluded and told Clarke Broadcasting that the Sheriff had a conversation with her and advised that she could be subject to a misdemeanor if she failed to leave, after causing a meeting to end.