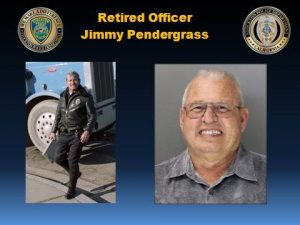 Burson, CA — A retired Stockton Police Officer, who resided in Calaveras County, was the victim of a fatal hit-and-run incident last week.

Jimmy Pendergrass, who made his home in Burson, started working for the Stockton Police Department in 1968, and spent 29 years working full-time with the force. Since 2000, he had been working part-time as a background investigator with the Stockton PD. Pendergrass was fatally injured this past Tuesday when he was hit by a vehicle in a Stockton crosswalk, at 7am, near the El Dorado and Washington Street intersection.

Stockton Police Chief Eric Jones said in a statement, “He was walking to our police station to report for work.”

The Police Department collected witness statements about the incident, and this past Friday arrested 57-year-old Sergio Meraz Chavira in connection. He is being held on $1 million bail and will appear in court on December 30.

Pendergrass also served as a pastor at a local church. His son, Brian Pendergrass, is a Sgt. with the Stockton Police Department.