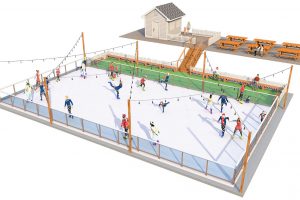 Columbia, CA – A push for a new attraction in Columbia could have the whole family lacing up skates and hitting the ice rink and that could also lead to a new yearly Winterfest event.

“There’s just not enough public activities for families and children,” pointed out Columbia Chamber of Commerce President and Board Chair Rosanna Sharps. “We [the board chamber] were thinking about what could draw business, commerce in this area during the wintertime when it’s really slow since tourism drops dramatically after the holidays. The ice rink was just the perfect idea.”

The Columbia Chamber of Commerce has already raised $82,000 from sponsors Chicken Ranch Casino, Blue Mountain Minerals, and Sonora Area Foundation to help build the “Gold Rush Ice Skating Park.” Those funds will pay for the ice rink, barrier system, 100 pairs of skates with racks, two skate sharpening machines, two skating assistance “buddies”, and rubber flooring, according to Columbia Chamber of Commerce President and Board Chair Sharps.  It would be located at the Marble Quarry RV Park, 11551 Yankee Hill Road.

“For every checklist that we had, it had everything,” explained Sharps. “It was close to the state park, it has bathrooms, a snack shack, parking, and it is already zoned commercially for the past 40 years.”

Touting the skating rink as a “fun and healthy activity.” It would cost about $67-to $70,000 to build. It features an outdoor 66ft x 37ft synthetic ice rink. Sharps added, “It’s not affected by the weather. It can be used year-round. It’s versatile and can be used for other things, like say a movie night.”

The rink will offer one-hour skating sessions by reservation. Still in the works is the ticket price, but Sharps relayed that it will be within the standard rate of other rinks. Still left to be raised is $50,000 to fund the cement foundation for the rink, fencing, benches, lighting posts, and an outbuilding for the ticket booth and skate rentals. Already the chamber has put out letters to possible sponsors and anyone can donate by filling out a donation form (click here) and returning it to the chamber at PO Box 1824, Columbia, CA 95310 or call (888) 488-1850. As soon as those funds are reached then the rink construction can begin. The hope is to start construction in March with open the rink sometime this year, but Sharps says the aim is no later than January of next year (2023).

The ultimate goal is to use the skating rink proceeds to fund the chamber’s ambition for an annual “Winterfest – Days of Music and Gold.” It will feature a historically accurate program of musical and theatrical performances, historical reenactments, and audience participation. Red Barn Productions, which puts on the Polar Express event in Jamestown every Christmas, would produce the theatrical programming. Not only will visitors have ten different venues to enjoy but there will be encampments, as Sharps explains,  “The Me-Wuks, the Chinese, civil war, and miners’ reenactments. So, people can walk around and see what the culture was like back in the day.”

The cost to put on the yearly event as calculated by the chamber is $275,000 for the first year which includes $27,000 of capital expenditures for three canvas tents. While the forecasted ticket sales for the first year of $138,000, combined with an additional $45,000 coming from the ice-skating rink will leave a shortfall of $92,000, the chamber has a plan. Once again through sponsorship donations to the tune of $123,000, which that funding will decrease, asserts Sharps, as ticket sales are expected to increase gradually over the next five years, reducing the need from sponsors.  Winterfest will be an annual event held between mid-January and mid-February. “The goal is to run six weekends but we’ll start off with maybe two to three weekends to start. It will provide historical, cultural, and educational entertainment,” detailed Sharps.