Update: Fire In The Groveland Area 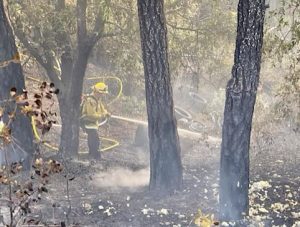 Update at 3:55 p.m.:  CAL Fire reports that firefighters have stopped the forward progress on a vegetation fire on Jackass Creek Access Road near Merrel Road in the Groveland area of Tuolumne County. The fire is less than an acre in size. CAL Fire details that there is a hose lay encompassing the entire blaze. Crews will work towards full containment and mopping up for the next couple of hours. No structures were threatened and what sparked the blaze is under investigation.

Original post at 3:20 p.m.: Groveland, CA — Firefighters are battling a vegetation fire in the Groveland and Big Oak Flat area of Tuolumne County.

The blaze ignited along Jackass Creek Access Road about a half-mile from  Merrell Road. CAL Fire reported that the flames broke out in some brush and it is a half-acre to an acre in size. The fire is moving at a slow to moderate rate of spread. Additional resources including two engines and one water tender have been called to the scene. There is no word as to whether any structures are threatened at this time. An update will be provided as soon as new information comes into the newsroom.