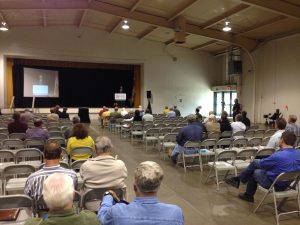 Sonora, CA — Water was the focus of the annual TuCare Natural Resources Summit held at the Mother Lode Fairgrounds.

The event featured speeches from lawmakers such as Congressman Tom McClintock and Assemblyman Frank Bigelow.

“Droughts are nature’s fault, but water shortages are our fault,” said Congressman McClintock. “We haven’t built a major surface water facility since New Melones in 1979, meanwhile the population has nearly doubled. We are not going to solve our water shortage problem until we begin building more dams, and we’re not going to build more dams until we overhaul the environmental laws that make their construction impossible.”

Assemblyman Bigelow spoke positively about the Proposition 1 water bond that will be voted on in November, but also the negatives he sees associated with recent state legislation implementing more groundwater regulations. When you combine the two, he said it’s taking “two steps forward and one step back.”

Dr. Roger Bales of U.C. Merced spoke about studies conducted on the Sierra Nevada that look at how changing forest practices over the past century have resulted in more trees, and as a result, less snowpack runoff.

“And with climate warming, the trees will have a longer growing season, use more water, and there will be even less runoff,” said Dr. Bales. “It’s not a simple picture where you can just say, cut the trees, and we’ll have more water. You need to also maintain ecosystem health. You want to restore the forest, and not clear-cut the forest.”

The summit also featured Kirk MacKenzie of the Defend Rural America organization. He talked about how he feels the idea of urban ideology can negatively impact rural areas.

The summit was held at the Mother Lode Fairgrounds.